A Big Flop Under the Big Top 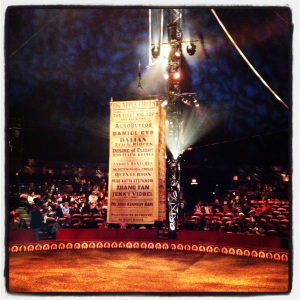 Under the Big Top at the Big Apple Circus

Cue the organ music, bright lights, enthusiastic ring leader…and the incredibly sad horses. My sister was in town a few weeks ago and wanted to take my nephew to the circus. I agreed and then at the last minute I started to freak out that this may be one of the circuses that has horrendous animal abuse issues. I frantically searched Google for the Big Apple Circus and nothing came up for animal cruelty. They only use horses and dogs, and they claim they treat them fairly. So, I went – for my nephew and sister – but when the horses came out, I couldn’t help but feel overwhelmingly sad for them. My other sister was sitting next to me and she leaned over and said, “You seemed really upset when the horses were performing.” I couldn’t hide it, and like usual wore my emotions on my sleeve. It’s a 40-foot ring with 6 horses doing tricks within this small space. It just didn’t seem natural. After reading about the animal abuse that takes place at Ringling Brothers, I was slightly skeptical that similar things could happen with the Big Apple but not to the public’s knowledge.

Oddly enough, the next day I started getting berated via email by protesters against the circus. Oh my gosh, how did they know that I went to the circus? They must think I’m an evil person. Then I read past the subject line and realized that the email was talking about Ringling Brothers, who was also in Atlanta that same week. I’ve pasted below the email that was sent to me about a dozen times throughout the day from different people, along with the pictures.

Dear Circus Supporter,
As you may know, The Ringling Bros Circus will be in your area next week and you will likely see locals protesting there. I’m writing to ask you to consider boycotting anything to do with Ringling Bros Circus because they treat their animals with documented horrific cruelty. Most of these animals are in constant agony. Ringling subjects all their animals to brutal “training” – including their baby elephants. Bears, elephants, tigers, lions and other animals do not voluntarily ride bicycles, stand on their heads, balance on balls, or jump through rings of fire. They don’t perform these and other difficult tricks because they want to; they perform them because they’re afraid of what will happen if they don’t. For animals in Ringling’s circus, there is no such thing as “positive reinforcement” — only varying degrees of punishment and deprivation.

Neither child nor adult should be giving a single dollar to Ringling Bros. because they will use it to buy stun guns, whips, electrical prods and bullhooks to torture their animals with until they comply. For your entertainment. This is nothing less than slavery. I know you wouldn’t want to be part of such horrific treatment of innocent and magnificent animals, nor would you help fund their suffering if you knew that’s what you were money was used for.

–For dozens of cruelty violations between 2007 and 2011, Ringling paid the USDA $270,000 for failure to comply with humane treatment laws. This is the largest penalty ever assessed against an exhibitor for animal cruelty. Violations include:

Failure to provide adequate veterinary care to animals, including an elephant with a large swelling on her leg, a camel with bloody wounds, and a camel injured on train tracks.
Endangering tigers who were nearly baked alive in a boxcar because of poor maintenance of their enclosures.
Failure to test elephants for tuberculosis.

–At least 29 elephants, including four babies, have died since 1992, including an 8-month-old baby elephant named Riccardo who was destroyed after he fractured his hind legs when he fell from a circus pedestal. In 2004, a 2 year-old lion died of apparent heatstroke while the circus train crossed the Mojave Desert.

PLEASE PLEASE boycott Ringling Bros. and those businesses supporting them- no matter where they are or what they are doing in your town. It’s a simple and moral way to stand up for what’s good and right. The circus is slavery. The animals could go free if nobody came to see them. http://emptyallcages.com/2013/01/14/circus-animal-cruelty-make-the-connection/

Since I’ve been eating a vegan diet, I’ve been more aware of animal abuse and cruelty happening around the world. I’ve been engulfed with reading books and watching documentaries about it. Previously, though, I thought I knew a good deal about animal abuse due to watching documentaries about the slaughterhouses years ago. It turns out I was wrong and I knew very little about other major issues happening around the world. So, I responded to this person’s email in order to get more information about the circus and animal cruelty:

I recently received an email from you about protesting the circus.  I’m not sure how I got on the list of your organization (I received 3 different emails from 3 different people this morning), but I’m glad I received your email.  I was recently researching this topic, and I find it repulsive what they do to these poor, harmless animals.

The Big Apple Circus is in town and only uses horses and dogs, and they seem to be fair to their animals based on the different news articles I read online.  The thing is, though, it just doesn’t seem right to have 6 horses in a 40 foot ring.  I couldn’t find anything on abuse with the Big Apple Circus, and I was wondering if you had any information about them or if they really are a fair circus.

I support your cause and appreciate what you’re doing to help the innocent animals.

And this was her response back:

Thank you for your response. We are activists doing a year long campaign against The Cruelest Show on Earth- Ringling. We’re “email leafleting” to cities one week prior to their arrival. Every city, all year. I got your email from searching randomly in your city. Today is schools and students so you’re likely one of those. I’m sorry to say that any circus with animals is a bad place. First and foremost they are slaves who need to be free. I was at a UniverSoul Circus protest this weekend looking at where the elephants ” live.” It was just a semi truck with the side rolled up, with tent stalls attached to it. So they stay in the truck, get decorated in the stall, perform and back in the trucks. Then on the road to the next place. They also did an act with a tiger suspended from the ceiling. I’m sure he was terrified. Again, thank you so much, we hope for responses like yours in all the hearts of the people we contact!!!

I felt pretty bad about going to the Big Apple Circus after reading that. Why can’t they just focus on acts like this one pictured below? The stunts that involved people were my favorite part of the whole circus.

This is so corny of me to say, but the more you know, the more you grow. And I have definitely grown from reading the literature and watching the films about animal abuse. I’ve been reading The Bond by Wayne Pacelle, which has been an extraordinary read about the kindness of animals as well as our abusive history with them. Wayne Pacelle put it exactly how I’ve been feeling lately:

It reminded me that I live immersed in a world where animal cruelty is a familiar topic, but that many people have scarcely heard of the problems of animal cruelty, much less our campaigns against them.

After learning more about this depressing topic, I tried to balance it out by watching the documentary titled Born to be Wild. Sometimes it feels as if animal cruelty outweighs the animal love from humans, but this movie does a nice job of illustrating the fact that there really are people in this world who have an undying love for animals and are making their own lives about protecting them. Now, that’s aspiring and a lovely way to live this life.

41 thoughts on “A Big Flop Under the Big Top”