Baking as a vegan has been somewhat challenging, but very rewarding. I have tried ingredients that I had never known existed before becoming vegan, such as flax seed (in substitute for eggs). I’ve also used food that just a few months ago I would have thought was extremely odd to put in baked goods, such as bananas, chick peas and black beans. Experimenting to get the right consistency and flavor has been interesting, but it’s been very helpful in the fact that my family and friends have been good sports with trying new things.

On my journey of helping others and getting involved in the vegan community, I decided to volunteer for the Worldwide Vegan Bake Sale in Atlanta this past weekend. The event was held in front of Dough Bakery, which was such a bonus because I love their food (more about that later). All proceeds went to the Atlanta Veg Fest and I’m proud to say that I helped them in raising $1,132 for the fest. This supported them in keeping the event admission and parking free to the public.

My contributions to the bake sale were black bean brownies from the Happy Herbivore and chocolate chip, coconut and chickpea cookies from Earthgiven Kitchen. The only variation I made was to the black bean brownies – I added mini vegan chocolate chips at the end with the oats to make them taste more like chocolate. Here’s a slideshow of the event and all the other fantastic items that were for sale.

I met a bunch of new people at this event, and I have to say that the vegan community has some of the nicest people I’ve ever encountered. Not only are they welcoming and friendly, but they’re also so positive. The event coordinators were telling me other ways to get involved, and I’m excited to attend some new events with them in the future.

After meeting and getting to know this new group, my husband and I headed into Dough Bakery for lunch. I got the “chicken” salad sandwich with pasta salad, which is pictured below. I seriously can’t get enough of their food. It was the first time my husband tried their food and he’s in love too! 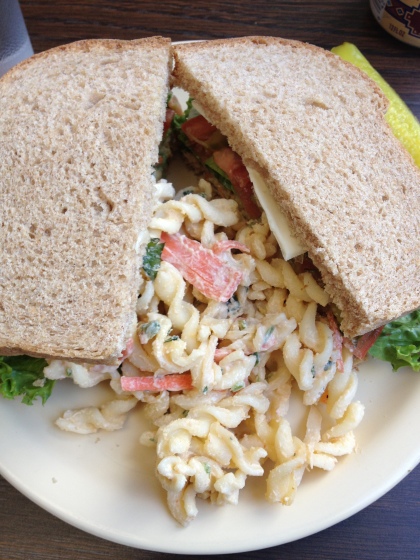