My First Protest and Being an Activist with Pride

I had a shameful flashback on Friday while I was standing in the picket line holding up my sign protesting the Pride organizers for having their event at the Georgia Aquarium. The dreadful memory was of the last time I was at the aquarium, which was less than a year ago and right before I went vegan, and I was there as a visitor (insert sound of heart breaking here). My husband and I took our out-of-town family there, hoping to enjoy some of the unique wildlife inside the tanks. Little did I know the real story behind the glass enclosures.

I never put two and two together, even when I was vegetarian. It wasn’t until I went vegan that I started to fully understand how awful humans can be and how we treat animals like garbage. I never questioned where the aquarium got the animals, but eventually understood after reading about animal rights when I went vegan. I finally realized that they stole them from the wild or bred them at the aquarium. After watching Blackfish, I gained more knowledge on how these sentient beings are mistreated when being held captive and locked up for human entertainment. All of this boils down to why I can’t judge others when they go to the aquarium or the zoo, however I do hope to inform them about how it’s inhumane to the animals to visit places like this one. 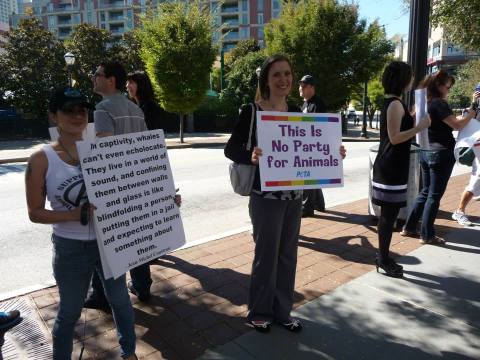 I’m happy to say that I’ve come a very long way in these short 10 months since I last visited the aquarium. This time around I was sporting a compassionate grin while holding a sign that said “This is no party for animals.” The fellow animal rights activists are awesome, too. They are such sweet and caring people, and such a joy to stand alongside in the fight for animals. I hope our efforts during this protest don’t go unnoticed and that we can stop the organizers of the Pride Festival in Atlanta from having their opening event at the aquarium in the future.

There’s absolutely no hiding the fact that I was at this protest considering my picture is front and center on this Creative Loafing article. I think the article missed the point, though, by focusing so much on the volume of the music. We were protesting the party being held at the aquarium and that it’s the aquarium that is making these mammals live in captivity. Yes, the volume of the music is a concern, however it’s the fact that the animals are locked up in the aquarium in such an unnatural habitat that was the main focus of the protest. We had nothing against the Pride Festival, we were just asking the organizers to move the event from such a cruel place. The Pride organizers haven’t listened for years, even after celebrities like Jane Lynch and Tim Gunn have reached out to them to move the event. One of my fellow protesters wrote a great article on her blog about why we were there. She so eloquently states my exact sentiments:

“It is just increasingly disappointing that the Pride leadership does not listen to the consistent outreach about why “Pride” and the “Georgia Aquarium” do not share values.

As long as Pride, whose main purpose is

‘to promote unity, visibility and self-esteem among lesbians, gay men, bisexuals, and transgender and queer persons and to promote a positive image in the Atlanta area and throughout the Southeastern United States through community activities and services[,]’

continues to ignore the rights of other beings to be who they are, to have the freedom that life gave them, unaltered by an agenda of an exterior entity, corporation or government, Atlanta Pride will fail its mission.

One cannot build Pride on an assault of humanity’s sense of ethics.” 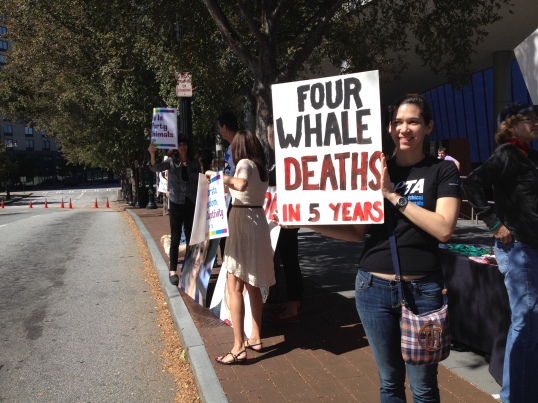 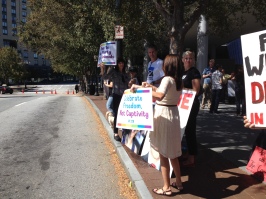 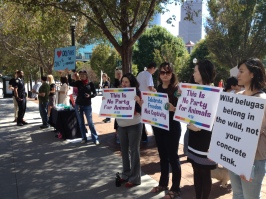 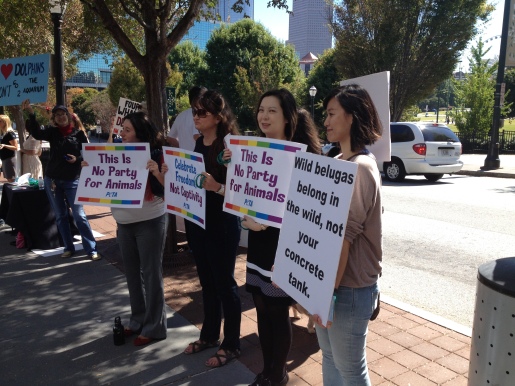 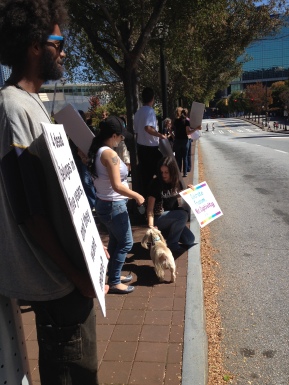 My animal rights activism didn’t stop at the protest, either. I volunteered at the Georgia Animal Rights and Protection (GARP) tent at the Pride Festival on Sunday. If you remember from the last time I volunteered at the GARP booth at a festival, I was dressed up in a chicken costume. This time, I was on the other side of the costume, interacting with people about GARP and veganism. I handed out leaflets on veganism and animal rights, talked to people about veganism, and got people to watch the 4 minute farm-to-fridge video.

It was amazing hearing people’s reactions after they watched this video. So many individuals got up and exclaimed that they were going vegetarian after seeing the horrors in the film. If you haven’t watched it, I highly recommend it – it will open your eyes to where your meat comes from. Just look at these people’s reactions to the movie and how they are being awakened to the truth. 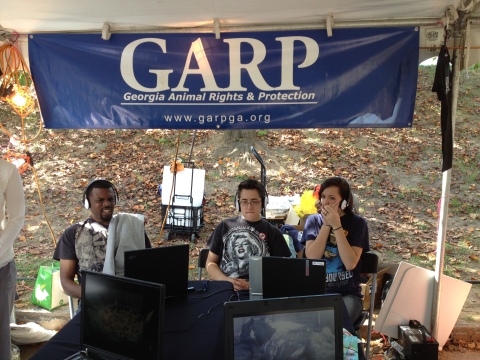 The conversations I had with people are still reeling through my head, and I hope that I left just a fraction of the impact that they left on me. People talked to me about how they were trying to go from vegetarianism to veganism; why they weren’t vegan anymore; what their hold-up was with becoming vegetarian; and their desire to get involved in the community with animal rights.

Two people really stuck out to me – one used to be a truck driver that transported the chickens to the slaughterhouse and the other worked in a pig slaughterhouse. Both told me that they didn’t eat that type of meat after being exposed to the cruelty involved with those animals. Sometimes these are the only jobs for people and they are forced to work in awful, stressful conditions, so I sympathized with them; however, I also told them how all animals are treated the same way – not just that particular type – and the meat that Americans consume comes from factory farms 99% of the time. I tried to stress the point that there is no such thing as humanely raised meat. Even if what I said didn’t resonate with them and they didn’t become vegetarian overnight, I will always remember their stories and the vividness of the awful pictures they painted for me of a true slaughterhouse experience. 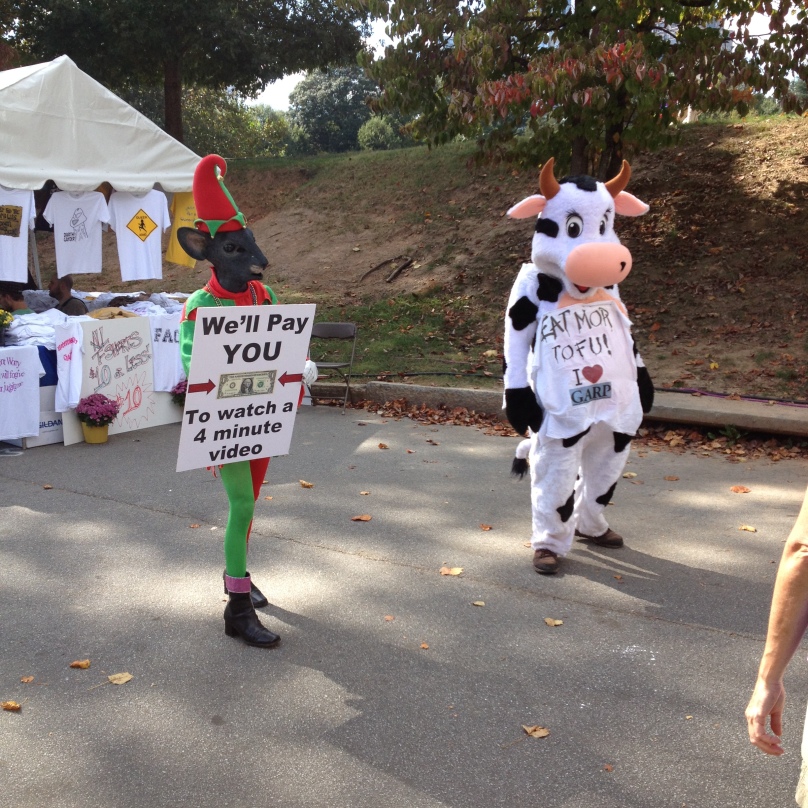 Although it was gut-wrenching to hear those stories, I left feeling so grateful for meeting all of those people. I would say my favorite moment of the day is a tie between the cow and the young activists. People got a good laugh at the cow’s sign, while also being relieved that it wasn’t the Chick-Fil-A cow. 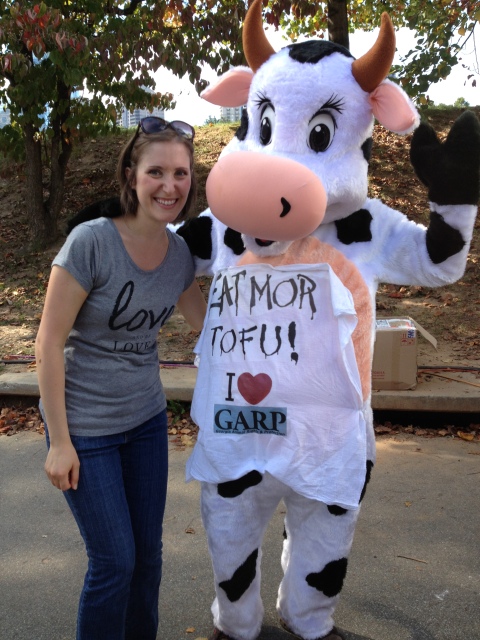 The daughters of one of the volunteers made me smile from ear to ear with their young activist efforts of handing out PETA stickers to strangers (I think Ingrid Newkirk would be proud). 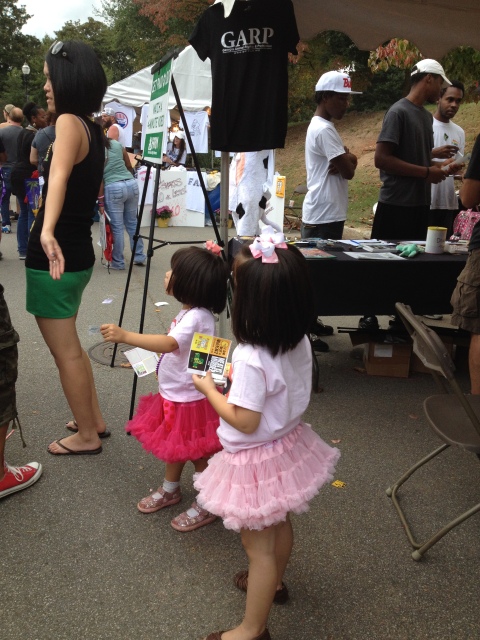 The weekend was full of memories that I’ll carry with me forever. And the friendships that have developed out of these events are heart-warming. As for the actual protest with PETA at the aquarium and volunteering at the GARP booth, here’s how I see it:

Even if just one person’s mind was changed about veganism, then I feel like that’s something worth celebrating with pride.