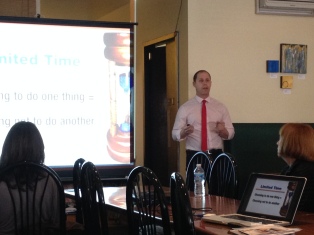 Over the weekend, I attended the Georgia Animal Rights and Protection (GARP) quarterly meeting. We had Jon Camp, director of outreach at Vegan Outreach, join us to talk about the power of leafleting. I left feeling charged and ready to take action.

My friend Muki is a leafleting pro and is an amazing volunteer for Vegan Outreach. She had a guest at the meeting who was only there because of Muki’s work in handing out literature on the streets! It was so inspiring and I can’t wait to join Muki in the next week to change some hearts and minds about veganism.

I recently finished The Animal Activist’s Handbook: Maximizing Our Positive Impact In Today’s World, which talks about the incredible work that Vegan Outreach does and how to be an effective advocate in the animal rights movement. Jon’s talk emphasized key parts of the book and reminded me of the powerful work behind leafleting. Jon said that for every 2 booklets that are handed out, at least 1 animal’s life is saved. How awesome is that?!

I liked how Jon mentioned that any little bit that people are doing to cut out meat helps. Whether it’s becoming vegetarian or vegan or consuming less meat, an animal’s life is being spared, which is why Meatless Monday is so important. If you can take out meat from your diet for just one day, you’d make such a tremendous impact. 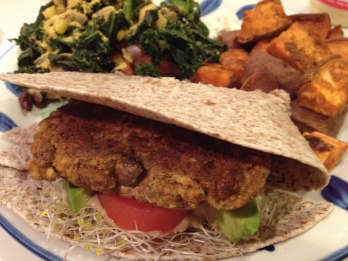 A few weeks ago for Meatless Monday, I mentioned that I was going to try my friend’s Spicy Tofu Burgers, and I wanted to give an update on how delicious they turned out. I followed my friend’s recipe to the tee, except instead of using eggs, I mixed 2 tablespoons flax seed meal with 6 tablespoons water and set aside for a minute – the consistency was perfect. Also, because it’s challenging to find low-sodium buns that are vegan, we opted for using the Ezekiel wraps.

The difficult part about this recipe had nothing to do with the recipe itself. I had to use an old blender to mix the ingredients together because I don’t have a food processor or a Vitamix (but I’m saving up for one because I’ve heard it’s life-changing to own this appliance!).

I paired the burgers with some old recipes that I’ve spruced up since posting them – autumn kale salad and homemade sweet potatoes. It was such a gourmet meal that was incredibly easy to make on a weeknight. These vegan burgers are now my husband’s favorite, and we’ll definitely make them again soon!