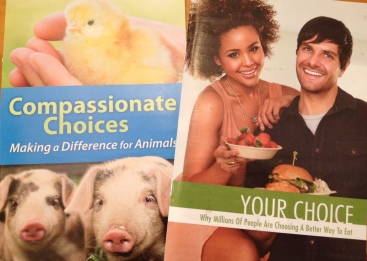 After Jon Camp, director of outreach at Vegan Outreach, came to speak at the Georgia Animal Rights and Protection (GARP) meeting, I was incredibly inspired to start leafleting. So much in fact that I hit the pavement within the week of his visit. Outside of protests and festivals, it was my first time leafleting. My friend Muki, who is an incredible leafleter and activist, showed me the ropes on what to do. Usually focusing on college campuses, going to the professional district of downtown Atlanta was new territory for Muki, so it was exciting for both of us!

We made our way to the CNN Center to start spreading the word about making compassionate choices. With my heart pumping, I stuck my hand out to the first person who walked by, made eye contact with them, and asked, “Want more information about where your food comes from?” And you know what happened? They took it – success! We repeated that line over and over again, and people seemed to genuinely have an interest in the literature. Part of me was expecting passersby to look at me like I was crazy, but that wasn’t the case at all. Some people even thanked US for giving them the brochure – it was beyond my wildest dreams!

We met a handful of vegetarians during our lunch hour of leafleting. One guy took several leaflets to give to his family and friends. We had a short but good conversation where I told him about getting involved on a local level through GARP.

Muki handed a leaflet to a lady who handed it back to her saying she was already vegetarian. Muki makes it a point to hug every vegetarian that she meets (being a hugger myself, I think that is the sweetest thing!), and as Muki was hugging this lady, the stranger started going into why she was vegetarian. She said that she can’t separate non-human animals from humans, and she painted a vivid picture for us that parallels human babies to baby pigs and cows. I’ll spare you the details, but her message resonated with us, as well as with her non-vegetarian friend who was standing alongside her listening. There’s no denying that she is a powerful spokesperson for the movement.

We also met some characters, which I guess is to be expected when passing out leaflets in downtown Atlanta! I handed a brochure to a guy who yelled over his shoulder, “Now those are some beautiful people! Maybe if I eat like them, I’ll be beautiful too.” That kept me laughing for a good while.

We handed out 100 leaflets – each! I was so pumped after the lunch hour was up that I wanted to keep going, but alas, I had to go back to work. It was an unforgettable experience, one that will motivate me to leaflet again and again. And if that doesn’t get me out there spreading the message about veganism, then I just need to pull up Jon Camp’s tweet about his recent accomplishment – at my alma mater, nonetheless – of reaching his 1 millionth leaflet!

On Friday, I gave out my millionth booklet for Vegan Outreach. Thanks to all the donors who made this possible! http://t.co/zXWB7EtXbK

3 thoughts on “Leafleting for Vegan Outreach”